“We have an 2.5 increase in live-born piglets per sow per year”

Sows at Inge Stevens and husband Eddy van Raemdonck’s closed farm have been housed in groups from as far back as 1987. They feed the gestation sows there individually using Nedap Electronic Sow Feeding. A source of irritation used to be the inability to feed the sows exactly as required in the farrowing pen. In 2017, they made a change to this.

They weren’t even really looking for it. But when Inge and Eddy came across an automatic feeding system for farrowing pens at a trade fair, they were soon convinced: Nedap Farrowing Feeding would offer them many benefits in terms of profits and convenience. The pig farm, which is primarily run by Inge and full-time employee Mieke, uses a three-week system and static groups. Inge explains this decision: “There are seven fixed groups of about forty-five sows each. We have two farrowing units and the remaining five groups are kept in the breeding and gestation stall. The young gilts become acquainted with the feeding station in a separate ‘transition group’. We considered working with a dynamic group, but the fixed groups offered more structure and a better overview.”

“Our four feed types are in the form of meal and are produced on our own land,” Inge explains with modest pride. “Using meal in an automatic feeding system is a bigger challenge, because it makes its way through the system a little less easily than pellets.” But Inge has everything under control. “By placing a steel ball on the screw jacks, the meal shakes into the dosing tube more easily.” During pregnancy, the sows are given one type of pregnancy feed. When the sows come into the farrowing pen for one week for farrowing, Inge switches to farrowing meal. In this way, the farrowing process gets under way quickly and the sows continue feeding well. After farrowing, they are given more easily-digestible lactose feed, and once the piglets have been weaned and the sows go to the breeding stall, they are fed weaning meal in order to promote oestrus.

“We used to have a 10% mortality rate. Since we started using Nedap Farrowing Feeding, this figure has dropped to 5%.”

Inge has two farrowing units, each comprising forty-eight farrowing pens. One of the two units has ‘balancing farrowing pens’. In these pens, the grate underneath the sow rises when she stands up and gradually goes back down when she lies down again. As a result, there is less chance that the piglets end up underneath their mother.

“However, the disadvantage was that the feed in this farrowing unit was more difficult to control with the telescopic tubes,” the pig farmer explains. “This is because the feeder is never at the same height in comparison with the screw jack.” With the arrival of Nedap Farrowing Feeding in both farrowing units, this problem became a thing of the past.

Benefits for profit and animal welfare

Their regular Nedap distributor Limko informed them all about the opportunities the system offers and how it works. The installation went smoothly, and the feeding system was installed in the farrowing unit within one week. Inge can now set up the feeding schedule perfectly and ensure that the dosages are exact. She walks through the unit with her smartphone and adjusts the feeding schedule individually with a simple tap on the screen, if necessary. “In the farrowing pen, I start with 2.5 kg of feed per day. The sows then start to have more energy. Right after farrowing, I increase the schedule relatively quickly, sometimes to as much as 8.5 kg per day,” the entrepreneur states proudly. “I now get a lot more feed into the sows, and it’s easier than before,” Inge notes. “Now we have an automatic feeding system, we feed the sows four times a day: at 4 a.m., 9 a.m., 4 p.m. and 11 p.m. That has a number of advantages. As a result of the extra feeding sessions, the sows feed more, which benefits the condition of the sows and the milk yield.

The sows also continue feeding well in warm periods, because they are fed at cooler times of the day. In addition, I have the impression that the milk yield during the day is more consistent. The piglets routinely start drinking after the sow has eaten. That also means that they get additional nutrition, which is reflected in higher weaning weights.” The greatest gain for Inge is the decreased mortality rate for weaning. “We used to have a 10% mortality rate. Since we started using Nedap Farrowing Feeding, this figure has dropped to 5%. This equates to a huge benefit for profits, but also for animal welfare.” The ability to feed sows more accurately in the farrowing pen and the improved condition of the sows when weaning brought with it another, unexpected, benefit. “When we weaned the sows on Thursday, they used to be on heat and inseminated from Monday to Thursday. Now the sows are on heat sooner and they are more synchronised. In general, all sows are inseminated on Monday and Tuesday. That’s a lot more efficient for us. Furthermore, since the condition of the sows in the farrowing pen has improved, the size of the litter has also increased from 27.5 to 30 live-born piglets/sow/year,” Inge notes enthusiastically.

When asked if she would choose Nedap Farrowing Feeding again, Inge doesn’t have to think twice: “I would buy it again in a flash. It just works really well and the software is user-friendly. Accurate feeding obviously pays off because the animals are in a better condition and the mortality rate in the farrowing pen is lower.”

Read more about the Nedap solutions that help boost the results of Inge's farm: 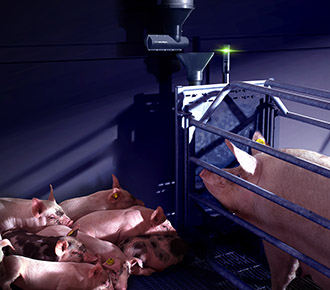