What do sensors measure?

The Nedap Smarttag Neck and Leg monitor a cows heat signals and position and measure the time and periods a cow spends eating, ruminating, standing, lying, walking and being ‘inactive’. This results among others in an image of the intervals between eating moments. Sick cows appear to be traceable already before calving due to a devastating eating time. How can you derive practical value from the information provided by sensors? What types of data are useful and which ones are not, and how do you translate data into something that will provide livestock farmers with a useful point of reference for the management of their herd? Four parties have gotten together to carry out a unique practical study into the solutions. Non-standard behavior during the transition has been found to be a predictor of problems after calving.

An ability to see at a glance a list of cows that are in danger of developing ketosis, ruminal acidosis or metritis after calving – which farmer wouldn’t want that? This may sound like the stuff of science fiction, but it certainly isn’t inconceivable. Utrecht University, Wageningen University & Research, Vetvice and Nedap are working together to carry out what they describe as a practical study that is globally unique.

Three years ago, the project got under way under the name of “Sense of Sensors in Transition Management”. On 18 dairy farms in the Netherlands, each cow was monitored from six weeks before calving up to one month post-calving. Leg and neck sensors by Nedap recorded the time the cows spent eating, ruminating, standing, lying down, walking and displaying “inactive” and other active behavior. This also provided a picture of the intervals between events, such as between the times the animal ate. Livestock farmers carefully recorded all diseases and conditions that occurred within the herd. Alongside data from the milk production database, the researchers collected data from nine farms relating to condition (BCS) and leg use (locomotion).

The levels of calcium and ketones were measured in the blood of the cattle concerned. After calving, regular uterine and ovarian assessments of the cattle were undertaken. “We quickly observed a number of interesting differences that were arising. It turned out that sick cows were spending different amounts of time eating even before calving”, said Peter Hut, a specialist who is hoping to obtain a doctorate from Utrecht University on the basis of this practical study and is being assisted in this study with at least thirty students. “With the help of information provided by sensors, our aim is to work to prevent disease on dairy farms. A condition such as metritis, for example, can be effectively predicted by observing differences in the data obtained from the sensors.”

Hut is supported in this assessment by Jan Hulsen, a veterinary surgeon who works for Vetvice and is involved in the project as a coordinator. “What we are seeking to identify are measurement points that form predictors of success. We will then convert these into targets to be used during the non-lactation period. These could be an average resting time of thirteen hours per day, less than ten percent of livestock spending fewer than twelve hours per day lying down or each cow must take at least four thousand steps per day.”

Longer periods in a straw-bedded pen

For Nedap, this research is important as it will be able to provide scientific evidence that will demonstrate that investing in sensors is both useful and effective. Arnold Harbers is involved in the practical study on behalf of Nedap. “It is extremely clear to see that the further that cows deviate from the farm average, the more the performance of each individual animal will fall behind. Animals that spend shorter periods of time eating during the transition will perform more poorly at a later stage of lactation in the key indicators of fertility. As a livestock farmer, taking prompt action makes it possible to mitigate those effects.” Harbers illustrated this by referring to an example from the study. “One of the participants was intensively monitoring the time that his fresh cows spent eating and ruminating during the first week after calving. If a cow spent insufficient time eating, she would spend longer in a straw-bedded pen.”

The most significant added value that data from sensors is able to provide is the ability to identify risk groups. Frank van Eerdenburg, a Senior Lecturer at Utrecht University, says that this information is not only of relevance to the livestock farmer, but also to his veterinary surgeon or adviser. “Tracing an individual cow that is at risk is important, but that isn’t the only possible application.” Jan Hulsen agrees. In his view, using sensors opens up a whole new world to livestock farmers. How often are the non-lactating cattle fed? How consistently are the livestock being managed? Until now, this type of information remained hidden. “As a livestock farmer and as an adviser, you can take steps to ensure that the “plan-do-check-act” system is working more effectively. You read the information provided by the sensors and decide whether to change your way of working, or not.”

Elsbeth Stassen: "Responding to the needs of livestock farmers"

Identifying sick cows in good time is becoming increasingly important. The larger our livestock farms are becoming and the lower the available manpower per animal, the more difficult it is becoming to identify sick animals. This is the view of Professor Elsbeth Stassen from Wageningen University, who is also involved in the study. “Increasing amounts of data are becoming available on dairy farms to support livestock farmers in identifying sick cows, but does that dairy farmer actually want to receive piles of data every day with lists of animals that require closer scrutiny? What we are doing is to analyze what information corresponds to the needs of the livestock farmer and how that information should actually be interpreted.”

For example, one of the students supervised by Prof. Stassen is focusing on the sensitivity of sensors. How specific is the signal being emitted by the sensor, in fact? Can differences in eating behavior truly be explained by sickness, or is another cause at play? “Certain conditions cannot always be identified with the naked eye. These include ruminal acidosis or ketosis, for example, but effective validation stands or falls by the accurate recording of the condition, and so it can be quite tense while we are waiting to see if the data are validated”, said Stassen.

Another student is examining the form in which livestock farmers wish to receive the information. “I can imagine that a livestock farmer will obtain greater added value from information he is able to call up for himself in real time. After all, if he is trying to round up a cow at the back of shed, he will want to see on his smartphone what is wrong with that animal.” 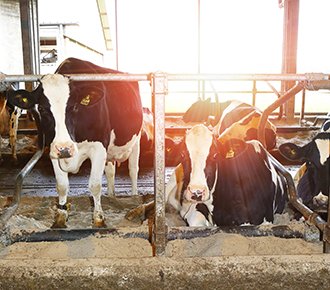